posted by VALORANT Esports Staff,
VALORANT Esports EMEA is expanding - here’s what to expect! In 2022, we aspire to make VALORANT the biggest FPS esports in the world - and it’s clear from the performances we’ve seen so far that EMEA is emerging as a true powerhouse region.

Following a phenomenal opening year, 2022 will see a number of significant, exciting changes made to VALORANT esports within EMEA.

By developing a new, multi-layered ecosystem, we can give opportunities to all players; from amateur and aspiring pro gamers participating in the newly created VALORANT Regional Leagues and VALORANT Regional Circuits, to the new wave of women taking VALORANT esports to the next level through our Game Changers programme; to the world's truly elite VALORANT stars through the VALORANT Champions Tour.

Most importantly, the expansion of the EMEA ecosystem will also benefit our loyal fans, giving them more opportunities to support their country, local team or favourite player and witness the best in the region battle it out for glory.

Here is the rough structure of the upcoming VCT 2022!

The VALORANT Champions Tour is the pinnacle of FPS esports in EMEA and our 2021 season produced some incredible and memorable moments for teams and fans alike, especially from our top four EMEA teams (Acend, Gambit, Fnatic, Team Liquid) who fought hard to make it to the first ever VCT Champions competition! In 2022, the EMEA VCT structure will be adapted to suit the whole region, allowing all the localised territories in the wider EMEA umbrella to grow and maintain a healthy level of competition.

The four EMEA teams that participated in VALORANT Champions 2021 will be invited back to VCT Stage 1 in 2022. A further eight spots will be up for grabs through two open and closed qualifiers in each territory; four spots in EU, two from Turkey and two from CIS. Teams from MENA will be able to compete in any of these qualifiers.

Teams will be able to qualify to VCT Stage 2 through the VCT promotion tournament; where the winners of the eight VRLs (more on these below) in Stage 1 will compete to face off against the bottom two VCT teams, with two VCT spots on the line.

We will have more information on the overall format for VCT soon, so expect to hear more from us in early 2022.

Get ready to cheer on some of the most elite competitors VALORANT esports has to offer, as they compete not just for the title of the best in EMEA, but for global supremacy. 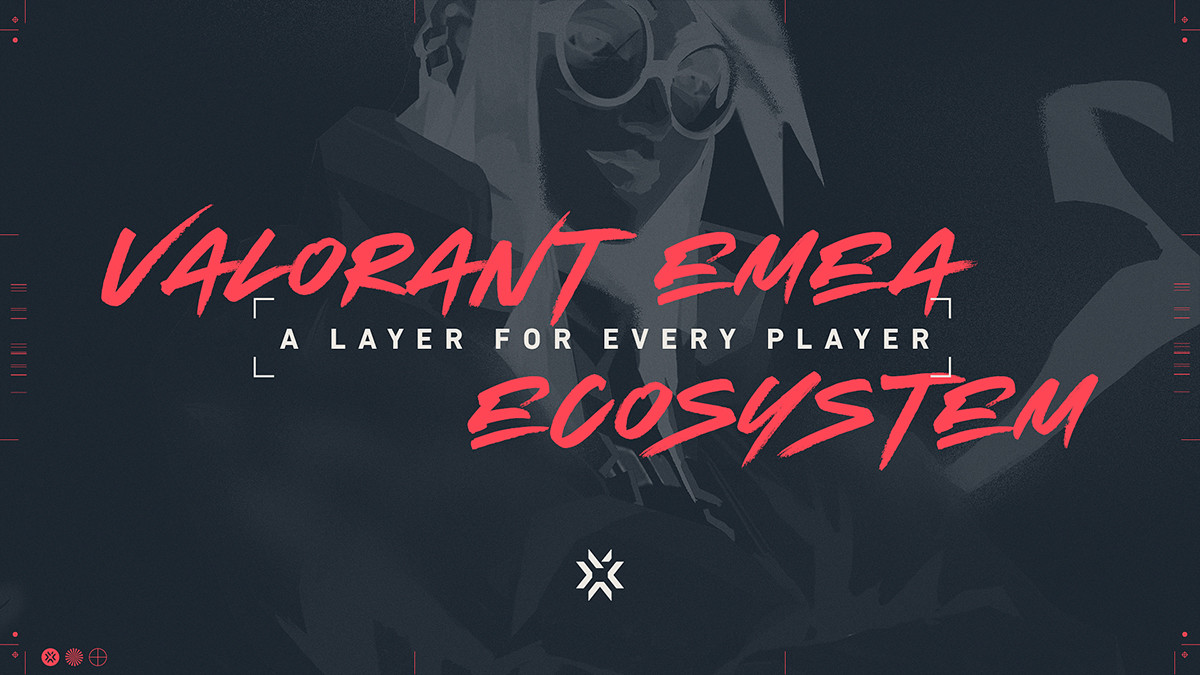 One of the new, exciting layers of the ecosystem we will be introducing to the VALORANT esports EMEA is the VALORANT Regional Leagues (VRLs).

The VRLs will become the peak of regional VALORANT esports, providing a highly competitive platform for talent development with a distinctly national flair.

Each league will be operated by our partner organisers and will run for two stages across the year, with a regular season and playoffs crowning a champion in each league. A certain number of the participating teams will be decided through VRL open qualifiers, at least once per season. At the end of stage one, the winner of each VRL will qualify for the VCT Promotion Tournament. In stage 2, each VRL winner will then qualify for the VRL EMEA finals.

Note: The number of VRL qualifiers and available spots may vary based on the results of the aforementioned VCT promotion tournament

The new VRLs will provide highly-skilled players with deeply satisfying competitive experiences, as well as giving them the rare opportunity to improve their skills in a structured ecosystem that fosters healthy, top-level competition.

On top of this, VRLs offer keen VALORANT fans the chance to celebrate and cheer on their national teams as they go head-to-head with the rest of EMEA.

The 2022 VRL season will kick-off with qualifiers on January 24, with the first split beginning the week of February 14.

Stay tuned and get ready to show your regional pride as teams battle it out to become their national champions!

After an incredible year for the Game Changers initiative across the globe, our teams have proven they are #HERETOSLAY, - and now it’s time to show that VCT Game Changers EMEA is here to stay!

We’re planning three exciting VCT Game Changers EMEA series in 2022, kicking-off in January with the remaining two taking place in May and September. Teams who succeed in these events will qualify for a place in the Global Game Changers event planned for November.

We’re also introducing the Game Changers EMEA Academy, a place for new teams and friends to compete in a safe space in up to six tournaments throughout the year. We’re excited to see brand new faces bring the fire to our Game Changers tournaments, be bold and stake your claim!

Game Changers is an important platform for our women players - the start of their path to pro. So, to encourage these teams to aim higher than ever before, the VCT Game Changers EMEA 2022 circuit will run parallel to the series within the wider EMEA ecosystem avoiding any overlaps where possible, allowing our teams to compete in both the Game Changers tournaments alongside the VRL’s and VCT open qualifiers.

To our Game Changers community - this is your time. Your platform. The world is listening. Bring the fire.

From 2022 onwards, we want to make sure we're helping to develop and promote grassroots VALORANT talent across the region. With this goal in mind, we'll be starting to roll out a series of new competitions specifically for these players called VALORANT Regional Circuits (VRCs).

We hope that these circuits will help elevate EMEA's thriving amateur competitive ecosystem to new heights. They'll provide players of all skill levels with a chance to experience the thrill of organised competition and prove themselves against other competitors in their region.

The typical circuit will give local players the opportunity to compete in individual competitions throughout the season, and earn circuit points for their team. At the end of the season, the teams with the most points will then battle it out in an effort to become the circuit champions.

Over the course of next year, players will see these Regional Circuits popping up across EMEA, with the hope that, in time, players all over EMEA will have a VRC to compete in.

As an absolute minimum, we will be broadcasting all VCT events in eight languages: English, French, German, Spanish, Russian, Turkish, and Polish, Arabic. We will continue to update the community on any other languages we’ll be broadcasting in closer to the time of the event.

As we continue to work hard to further grow this burgeoning esport and reach a wider audience, we hope this new format will give certainty to fans and players alike as to how VALORANT esports in EMEA will look across the year. We truly believe that through this new ecosystem, we can build deeper engagement between teams and players, discover the future of VALORANT talent, and build up a lifelong fanbase.